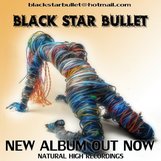 We were recently sent through a copy of the latest album from Black Star Bullet to see what we thought of their sound. Originally forming in 2001 under the name Loophole, the band have already gone from strength to strength, landing a spot on the Godiva Festival bill and continuing to develop their own strengths and skills. Having released albums ‘Glass’ and ‘Blackout’, the band state ‘Trev and Andy’s alternating lead vocals, lead guitars and catchy harmonies had become the signature of Loophole’s sound’ – something which personally I reckon sounds cool! Changing their name to Black Star Bullet in 2010, I was looking forward to seeing what this 12 track album had in store for me!

Opening with In My Blood you’re greeted with a funky guitar line and a raspy vocal line, all underpinned with a  simple but effective drum and bass combination, it’s an opening which simply leads you in and makes you think ‘I’m going to enjoy this’. Sounding akin to the likes of The Dirty Americans, there’s a classic rock sound to proceedings whilst still keeping everything fresh, engaging and just downright simple – there’s no need for frills when the music is kept this straight forward and to the point, it just works on a simple level. Catchy, energetic and a track which easily sits alongside its more mainstream peers, this is not only a great way to open an album, but a track which will make you put the album on again and again.

A bass heavy opening greets you for the beginning of This Is Rock N Roll – and I have to agree that yes, yes it is! Keeping the bass high in the mix and picking up the pace from the previous track, this one makes you want to move along with the band – not moshing, dancing. Catchy, funky and energetic throughout, this is another track which seems to demonstrate this bands love for all out good time rock n roll music, there’s even a pumping piano line in here! Take It Back soon follows on and continues the theme perfectly, opening once again with that awesome bass kept high in the mix, the drums setting the pace and the guitars keeping everything solid, although relatively restrained. Fading the vocals into being in an almost haunting style, there’s a slightly heavier feeling to this track than the ones before it, by no means a bad thing as it makes this track stand out almost as a new chapter of the album. Catchy until the moment the track comes to a close, the album’s looking damned good so far!

Hate comes in next, the name suggesting something aggressive is going to be upon us, but instead throwing in another funk laden rock track which is bound to have live crowds dancing like lunatics. There’s an aggressive edge to the lyrics in this track, but the music almost balances them out, not allowing the anger to take over but instead adding further to the all out power of the track. Every bassist out there is going to love this track, the bass line seems to dance around the fret board just to keep everything interesting, great stuff! 8:50 AM continues the bassy theme of the previous track, opening the track and then bolstering the over all sound out with a backing rhythm section which, when played at the right volume, is sure to have your neighbours neighbours banging on the walls. Breaking everything down to simple elements through this track, there’s a real sense of a band who understand how to craft catchy songs and use each element of the band to  the best of their abilities. This is probably my personal favourite track from the album, there’s just something about the alternating sounds which it’s got which I love, it’s like Guns N Roses mixed with Velvet Revolver – funky yet hard rocking!

Slow Down doesn’t do what it says on the tin, instead it throws you into a mix of syncopated drums, gravelly layered vocals, roaring guitar riffs and bass heavy rhythms – and there I was thinking I was going to get a break! Funky despite the off beat nature of the track, this is another one which is testament to the bands ability and goes further to show that these guys are surely a force to be reckoned with. I particularly like the slowed down, broken down catchy chorus, it almost acts as a little rest between the hard hitting main sections. Energy Daze is soon upon us, opening funky and hard hitting from the moment it begins before breaking down to allow the vocals to really accentuate everything whilst keeping it relatively simple. The main riff of the track once again harks back to the likes of Velvet Revolver, very similar to Slither in a way yet somehow unique to these guys. As if to make sure you’re still listening though, Online Lunch is a complete contrast to this track, opening in a classically punk style with palm muted guitars and faster paces drums – this is another rock track sure but there’s a more frantic approach things here. Dare I suggest the following, but there’s a real sound akin to Feeder, although obviously far heavier – but the main vocal line over the guitars almost follows the sort of progression they offered on their earlier albums – or at least I think so!

The Game suddenly seems to offer a brief respite from the hard hitting tracks before, opening much softer and slower whilst still keeping the power there to be seen, but it doesn’t last! Soon picking up the pace once again and launching head first into a faster section of hammering drums, roaring bass rhythms and more of those gravelly vocals, the whole mix engulfs you and makes you want to hear more, and to see this live! The Answer is another track along the same lines, opening softer but keeping the power there to push the track forward, you could be forgiven for considering this akin to some of the earlier 00’s indie type bands, all down to the beat. It has to be said though, the chorus for this track is awesome – anthemic in its construction and one which people are sure to sing along to on the live scene!

Penultimate track, Fake, is soon upon us, opening with more palm muted guitars under soaring vocal lines. The whole mix seems to build in your ears as you listen to it, slowly suggesting what is to follow without giving too much away so that the end result is a surprise right up until it kicks in. The surprise, a Seasick Steve style section of guitar before launching into a galloping riff under a relatively simple solo – the whole mix forming something which you want to listen to when out running or in the gym – it’s inspirational! Finishing on a high, it almost comes as a shock when final track Mistakes comes into being to close the album. Softer, emotional and more laid back, this track closes things leaving you with a taste in your mouth, a taste which makes you go back to the beginning and start all over again. This track comes close to my favourite again, only just missing out but still standing out as a track which I know I’ll be listening to again!

In closing, I thought it important to mention one of the best things I have ever seen greeted me when opening the album for the first time. On the CD, where usually you see that scrawl about not copying or anything, the band have instead got the following passage: ‘Unauthorised copying, lending, public performance and broadcasting of this recording is positively encouraged. After all we’re only the poor downtrodden artists trying to make a measly crust’. I don’t know why, but I love it, and I think it reflects the outlook of the band in general. Their music is well written, well put together, but at no point does it take itself too serious or try to be something it’s not – it’s solid rock n roll which has been taken and elevated, put on steroids almost, just to make sure that the album stops being simply an album, and instead becomes an experience – one that you’ll relive time and time again. In short, wow – this is a band you need to hear.

To find out more about Black Star Bullet, check out their Facebook page HERE.