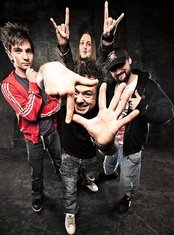 The guys over at Skratch The Surface recently sent us through a copy of Challenge Accepted, the new EP from Bristol based Bonemud, due to be released on the 3rd of December 2012. Having gone through numerous band members over the course of their time together, this is a band associated with rapcore and nu-metal, however the one sheet goes on to say that they draw influence from a wide range of influences. Saying they’re all about the music, energetic live performances and simply enjoying themselves, Bonemud are a band that could have the potential to achieve something special, so I hit play to see what was going on!

Opening with Homiez things become immediately clear, opening with that signature rap-core style sound, combining spitting vocals with a pounding backing mix to get things moving from the word go. Sounding akin to the likes of Saliva but with more attitude, the opening moments of this EP are raw, hard hitting and powerful, the sort of thing which is going to ignite a venue, get people moving, and hook people on to the bands music from the off. It’s striking how they’ve managed to combine the fast paced vocals with a serious dose of heavy behind the scenes, moving away from the usual crowd that surrenders heavy for the rap element of their tracks. As an opening track this does what it should, immediately getting you reaching for that volume up button and not showing any signs of fading back until the EP comes to a close.

Lil’ Whore certainly continues this approach, opening far slower initially to create a sense of calm and emotion within the music, but still managing to keep that dark sense of power flowing through things. Hard hitting lyrics flow smoothly out of the mix before once again hammering into gear with that distorted guitar and bass combo, the drums driving everything and once again luring you in and daring you to turn it up. Powerful, hard hitting and a track which stands out as a serious high point on the EP, this is one to make sure you check out if you get a chance, and a track which has the potential to become an anthem for the band. Something I Am doesn’t bother with any emotional intros, this time simply throwing us straight into the mix and reminding us what heavy is. Roving back towards the more hard hitting rap style of the opening moments of the EP, this track once again seems to  pack one hell of a punch, combining the rap with a serious dose of distortion and showing that there’s a new band to be looking out for on the scene, a band that make the early pioneers of rap metal look like school boys playing in the fields, and it’s awesome to hear.

Closing with U & I the guys in Bonemud finish on another emotional introduction to the track, showing off their melodic side once again and finishing things in a manner which is sure to get you going back to track number one just to experience it all over again. Powerfully fast riffs combine with rolling drums and a soaring bass rhythm to back everything up, forming a sound which is impossible to pigeon hole, but letting you know that it’s not something to be concerned about, the music is the key here, and it’s sounding damned good from where I’m sat!

Rap-core and nu-metal brings about images of the likes of Linkin Park and Papa Roach, and if you’re comparing Bonemud to them then you’re miles off of the mark – these guys are far more serious. Heavy, powerful and raw throughout, this is an EP which packs a punch, lets you know what you’re listening to, and doesn’t bugger about with anything unnecessary – definitely one hell of an accomplished EP. If you’re looking for a band that are going to get you moving, jumping and drinking beer then this could be them, definitely one to look out for.

To find out more about Bonemud, check out their Facebook page HERE.