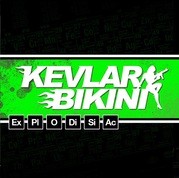 Those chaps in Kevlar Bikini don’t half work hard, always sending us stuff to check out (see below) and generally being a nice bunch of people, so when they sent us through a link to their new video for Devil’s Jukebox, who were we to refuse the chance to check out what they’d been up to?

As you’d expect from the guys, this is another full on aural assault brimming with hard rock hooks, moments which will make you want to get moving, and a video which shows off their energy and dedication to their craft. Sounding akin to Buckcherry but with a heavier edge to things, this is a track which promises to become a live favourite for sure, the sort of thing which will get crowds jumping, moving, and loving every second of what they’re hearing. Catchy hooks, hammering guitar lines, roving bass rhythms and a solid drum section all back up the raspy vocals, resulting in a sound which you’re going to hear, then want to hear more of!

I like Kevlar Bikini and have a mission to see them live before long, so it’s cool to see them producing a video like this which shows off the sort of thing we can expect to see from them live. Make sure you watch the video, check out the guys other stuff, and show them some serious love, as I think that they’re going to be a band we’ll be hearing a hell of a lot more from.

To find out more about Kevlar Bikini, check out their Facebook page HERE and their video to Devil’s Jukebox below!

We were recently contacted by punk/rock n roll/hardcore quartet Kevlar Bikini from Croatia. Having formed in 2010, the band have set out to play the kind of music that they wanted to hear, not necessarily following the conventions of what they were expected to do. Having just released their debut album entitled Explodisiac, mixed by Tomas Skogsberg (Entombed, Refused, Katatonia) and mastered by Pelle Henricsoon (Meshuggah, In Flames, Poison The Well), these guys seem to already be one to check out – so we figured we’d better do just that!

Devil’s Jukebox immediately sets the tone for the album and suggests that this is going to be one hell of a journey. Bass heavy rhythms flow out of the speakers as the track comes into being, airing on the punky side yet keeping a firm sense of rock running through things from the go. If you can imagine bottling energy, then this is what the result would be I imagine, from the word go it makes you want to get up and get going. Sounding almost akin to the likes of Buckcherry, the opening moments of this album suggest damned good things to follow. Yikes Mama doesn’t disappoint either, once again opening with a sludgy bass line to back up the mix, sounding almost funky from the off yet hitting home much harder than that. Energetic, funky and downright full to the brim with noise, this is the sort of track you crave on the live scene – one which is going to get you moving along and make you want to get involved!

Rats And Copycats continues the hard hitting theme of the album, once again throwing into a mix based around the spat gravelly vocals – it’s a striking sound the band have managed to achieve here but it works damned well. Moving through the sections of the track, what I really like is how they don’t follow expectations, instead forming tracks which they want to play, giving each track a unique feeling throughout. Supersized Buttcake is almost a shock as it comes into being, opening with a vinyl effect and some amusing lyrics, this track is  bit of a move away from the previous ones. Almost nu-metal in its sound at first through the rap like vocals which get things going at first, the track soon takes form and once again gets things moving, encouraging the pits to form as you try to keep up with the roving bass line. Suped Up Machine is however a point on the album which you need to make sure you hear, once again opening as it means to go on but this time forming a track of epic proportions. Bass heavy rhythms keep the track moving throughout, this time simply getting you moving and making you want to turn it up louder and louder. This is quite possibly my personal favourite from the album, and a track which needs to be played some more – this is one to check out.

Sweet Ride seems to slow the album for a moment, opening with bike sounds and a soft guitar line as it comes into being, hinting at something more sinister and dark to follow. Acting as a lead in to Jab, the thoughts of chilling out for a moment are soon cast aside and once again you’re thrown straight back into the pit. Don’t make any mistakes here, this isn’t metal, this is down straight rock n roll designed to get you moving, only heavier and more to the point. This is another track which is full of guitar lines designed to get you moving whilst still throwing down at every given opportunity, making this into another example of how this band can craft energetic funk fuelled tracks of pure goodness. Pretzelspine (??) soon follows on and once again keeps the sense of pace running through everything, this time launching into a track far more towards the punk side of things. Somehow catchy yet still original enough to not be seen as over produced, this is a track which has the potential to be a massive track for the band – another one which needs to be checked out for sure!

Urinea once again suggests that things could be calming down to close the album, this time opening with an acoustic guitar line fuelled by a simple yet effective drum beat. What’s most striking here is how intricate the guitar line really is, it’s a carefully crafted moment which doesn’t follow convention once again, simply doing songs which the band want to do. Sounding almost akin to the likes of Incubus, there’s a sense that this is the band doing what they want to do, playing music they want to hear and sticking to their guns. Does this track work on the album, I’d say yes but I imagine there will be those who say no – personally I think it’s great. Closing with Kiss It Like Its Skinny Liv Tyler (awesome track name!), there’s one more chance to be returned to the hard hitting style which this band seem to have created. Leaving the album on a high, this track finishes things and leaves you wanting more – personally I found myself returning to the beginning once again just to experience the whole thing once more.

What I really like about Kevlar Bikini (apart from their name) is their ability to create tracks which don’t follow the conventions of any genre, instead forming tracks which are fuelled by rock yet tainted with emotional aspects, punk, hardcore and downright funkiness, the whole mix forming tracks which transport you to your own private space where you can just sit back and listen. Sure, there are moments which don’t necessarily make sense, but my main question there would be does it matter! What you’ve got here are 10 tracks, each of which have been carefully crafted and demonstrate a band who are out to take over the world – long live Kevlar Bikini.

To find out more about the band, check out their MySpace page HERE.