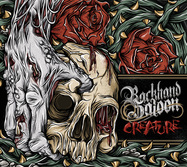 We’ve featured Backhand Saloon a few times in the past and have always loved what we’ve heard, so when we found out that they had a new track out there ready to be heard, we jumped at the chance to check it out. Recorded at Brightsound Recording Studios with Mr Mike Keen at the helm, Hollow Heart is the latest offering from this South West unit, so what’s happened to their sound?

Raw and powerful from the word go, this is a track which grabs you by the throat as soon as it kicks off and doesn’t release until the band decided they’re good and ready. Powerful vocals combine with hammering guitar work, all forming a heavy assed mix which is sure to get you moving, then backing it up with a blistering rhythm section. Despite the all out power that Backhand Saloon have got on power, they’re not afraid to show off their ability to use melody within their music, demonstrating just how heavy it can sound when it’s used properly. Particularly striking is the middle section when the whole track seems to fade back and we’re left with a soft, serene approach, the sort of music which sooths you as it washes over you, allowing you to embrace the sound fully before once again being launched back into that pit of all out power and devastation. Closing as it began, there’s not a moments respite here, just a solid track which does what it should, reignites that sense of excitement about music within you.

I’ve been struck by just how powerful Backhand Saloon can sound since I first checked them out, but this new track has taken things to a whole new level. Fast paced, raw, distorted and intense throughout, this is a track which shows just how much these guys are developing as a band. If you’re looking for a band who are going to be exciting live, are going to offer up tracks which remind you how heavy metal can be, then look no further. Backhand Saloon are here and are here to stay.

To find out more about Backhand Saloon, check out their Facebook page HERE. 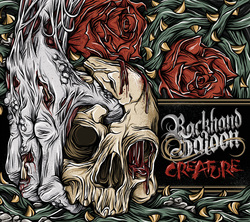 So we featured Backhand Saloon a while back, so when they dropped us a line about their new album, Creature, I was looking forward to hearing what they had been up to. However…thanks to some major internet issues and problems I got stuck, couldn’t download the album and instead had to simply look at it sitting there, waiting for me to open the file and check it out. Finally though the opportunity came and I managed to get it downloaded, so I sat back, cranked up the volume and prepared myself to hear what they’d come up with.

Opening proceedings with Cassiopeia we’re led gently into things, the opening moments almost showing the band getting ready to go, all before the whole thing breaks! Hammering onwards with a roaring vocal line, pounding rhythm section and hammering guitar line, the track immediately returns us to the Backhand Saloon we all know and love, the sort of sound which is going to make you remember why it is you love music, why it is you listen to bands like these guys, and why we all need to get out to see them at a show. Heavy, fast, intricate and straight down the line from start to finish, this short track may not last long, but the punch it packs is plenty enough to satisfy even the heaviest appetite, definitely starting things off on a high. Title track Creature continues this approach with aplomb, once again managing to show off the bands heavy side as well as their technical abilities. Groove orientate riffs fuel the track as it grows around you, those roaring vocals continuing to bounce around as the backing track backs everything up, forming a mix which is deep, laden with melodies and damned awesome to hear. I’ve always admired the sound of Backhand Saloon since we first heard them, and it’s good to see that with this latest offering, they’re still standing by their guns and hammering out tracks which will make you sit up and take note of what’s going on.

Thorns comes as somewhat of a shock then when all of a sudden, everything fades back to an acoustic line and slows the feeling down for a moment. Growing as the track opens, the acoustic line is soon accompanied by a soaring lead line, contrasting the soft and heavy approach as it begins and showing us that this isn’t simple or straight forward, this is something they’ve thought about and formed to their precise recipe for success. What’s most striking about this track is that it’s an instrumental, allowing you a moment of calm reflection before Prometheus follows on and takes over the lead. Feeding on from the previous track, this one opens softly and melodic once again, but suggests that it’s not going to last, there’s a real sense of darkness running through the mix which suggests we’re about to be returned to the heaviness once again – and soon enough we are! Kicking back into the mix at full tilt, the band resume their all out approach and present us with another trade mark track, keeping things interesting by changing the pace throughout but all the time letting us know that it’s still them that we’re listening to. Definitely a stand out track, this is one of my personal favourites from the album, there’s just something about it which I know is going to keep me coming back to check it out time and time again.

Mora comes up as the penultimate track on the album, once again demonstrating the bands ability to craft tracks packed with depth and technical hooks. Refusing to go down the straight forward or easy route, this is another track which almost showcases the style of the band and gets you wanting more.  There’s also an emotional edge to things on this track, showing off the roots of the track and allowing you to embrace what’s going on fully, it’s one which will make you think rather than make you go mental to, but it’s awesome to hear all the same. It’s only then left to Acid Fang to close the album, finishing on a raucous track packed with screaming vocals, hammering guitar lines and more of those syncopated drums. Offering up different styles throughout this track, this final one is a moment which opens the door for what is going to follow, at the same time closing the record and leaving you with a thought that now might be the time to get out to see these guys!

As I said before, Backhand Saloon are one of those bands we’ve featured before and I know are going to provide tracks which I’ll enjoy., but I didn’t expect to hear what I’ve come across here. What’s on offer with Creature is a record which shows how a band have developed, how their approach has changed, and what we’re going to hear from them in the future – in short, this is a record that you need to own.

To find out more about Backhand Saloon, check out their Facebook page HERE.

Backhand Saloon, a 5 piece band from Exeter got in touch with us and put us on to their EP to see what we thought. Being the ever helpful folks that we are here at Record-Review, we of course obliged and had a damned good listen.

What I like about hearing new bands is that you’re never quite sure what you’re going to get through each day. ‘Backhand Saloon’ describe their sound as heavy, southern and dirty so I was looking forward to hearing what they had on offer.

First track ‘Curses’ opens with a soothing acoustic guitar line, luring the listener into a sense of safety and calm – this doesn’t last! As the background fills with feedback suddenly the track launches into a sludgy riff bounced along by a solid drum beat. When the vocals kick in, all sense of safety and calm is gone, instead we’ve ended up in a very dark and heavy place.

‘Brinks Mat’, leads on from the first one picking up where it finishes. This track is very different, the guitar is bouncier but just as heavy, the vocals have changed from a guttural roar to a raspy, southern rock style vocal – this combination works, especially when the vocals become layered and a new depth is added.

‘Tempest’ follows on from this track, immediately picking up the slower, darker guitar line of the first track. What I really liked about this track was that the bass was right there with the guitar line as it built up, something which is often lacking in a lot of tracks. Suddenly though, the slow guitar line is gone and the track is propelled onwards bringing in gang vocals, roars and more of those sludgy guitar lines which I’ve really come to enjoy.

Final track ‘Disaster Is My Name’, finishes the EP in the same way as it begins, dark and heavy. Building up gradually from feedback to riffs, this track has a more funky edge to it with the guitars riffing all over the place and drums setting the pace. Again the bass is right there in the mix, which, along with the slowed down chorus of the track, really finishes this EP off well.

My view of this EP is simple, this is some damned good and dirty southern metal which I can see myself sitting back and having several beers to. I like the fact that the band hasn’t tried to go too heavy, they’ve found their level, stuck with it and produced a solid EP as a result of it.

In summary then, check this out as I reckon there’s a damned good chance you’ll like it. I know that I for one will be trying to catch these guys live as I think live, these tracks will really come into their own.

To find out more about Backhand Saloon, check out their Facebook page HERE