Based near Collumpton in Devon, Brightsound Studios features the usual kitchen and toilets along with a massive live room and very spacious control room. Bands who have used Brightsound and we've featured are We The Divide, Mad Hatter 2.0 and Backhand Saloon.
BrightSound can offer you services such as Recording, Mixing, Mastering, Editing, Pre-Production, Post Production and Lessons meaning you're going to be dealing with a well established, professional and knowledgeable company.
Check out their website HERE for more details and for how to get in touch with them.


Mike from Bright Sound has been kind enough to let us know about what's been going on in the studio this month as well, read on to find out more...

Click HERE to see the spanking new PodCast from BrightSound Studios featuring Cambion - it's well worth a watch believe me!

News From The Studio...

Run to the hills, lock up your children, flee for your lives and hide your badgers. Madhatter 2.0 are back in studio .... again!

Madhatter 2.0 are back in the studio next week recording what they are calling their 'big one.' This E.P is the one that counts. This is what they have been building up too, it will be more than just a couple of tracks on a cd. It will contain the blood, sweat, heartache, frustration, grit, determination and soul of all four members. Which, they have all poured into this band; Refusing to give in and lie down where most bands would fail at the first post (or service station). This was echoed by being awarded the ' 2011 - Special Award for Outstanding Contribution to Music' - As voted for by TotalBikerFm.

For two years Madhatter 2.0 have been gigging and solidifying their sound into a brawling metal monster that slaps you round the back of the head, pulls you up by the ears and screams 'IS ANYONE IN THERE?' Whilst simultaneously grooving the living day lights out of you ... I've literally left their rehearsals with groove tracks on my face..... ..Great for malteaser tricks!

So what does 2012 hold for Madhatter 2.0? Well, you better go ask Marc, Paul, Hayden & Kurt, as they sure as hell don't let anyone else decide for them. The 'hatters are their own vehicle bulldozing their own path. Either get out of the way and jump on or get 'hattered. 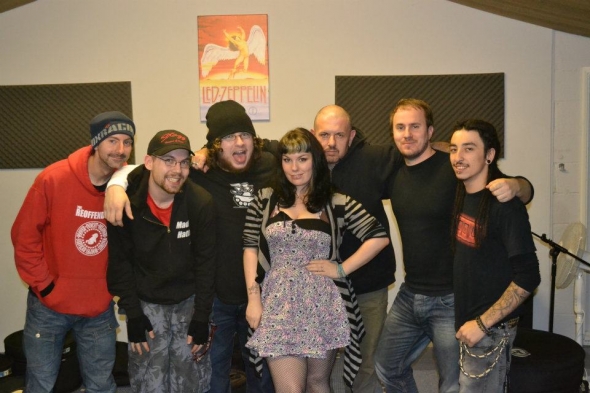