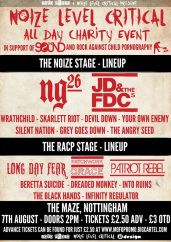 Noize Level Critical is a radio show based in the Midlands of the UK, broadcasting every Tuesday from 8-10:30pm (GMT) and 3-5:30pm EST on www.rockstarsglued.com. The great thing about these guys is that the show is there to promote unsigned talent (as well as all things rock) - so they're always on the look out for new bands to be featured on their show!

Any bands wishing to be featured on the show should get in touch with the station on noizelevelcritical@hotmail.co.uk making sure you send across all of the details you want mentioned - from your tracks through to your gigs or upcoming releases.

We're hopefully going to be working quite closely with these guys to bring you the latest bands on the scene as well as helping to get all of you out there some airplay. In the meantime though, make sure you check out their Facebook page HERE and give them a like!

Now - for all you NLC fans out there - we bring you a Blog courtesy of Big-D himself! Read on to find out what Dave's got to say for himself...

Well it’s that time of year when we wish good will on all men!!! Why ??? because it’s the Christian thing to do.. well gonads to that because there are a couple of people out there that I really hope Choke on the Tanner in the pudding, not that they will be reading this, or will they ???

But to be honest 2011 is the year I dived head first into doing a Rock Radio Show, as I have said before little did I know what was to hit me..Over the past 8 Months I have met so many fantastic people, honest and genuine people, hard working and talented people, Inspirational people and people I am now proud to call Friends and not just Facebook Friends, but true Friends, those people, I hope, know who they are.

Well at the start of 2011 I hadn’t even heard of 90% of the bands we now regularly play on Noize Level Critical and last week I was honoured to be able to deliver a show of 100% British Underground Rock Music. There have been so many awesome bands come to my attention, so many awesome bands we have interviewed, done acoustic sets with, seen Live and given up their time to support The Charity, Rock Against Child Pornography and Abuse UK..  For 2012 I hope for more of the same but also hope for better and bigger things for all The Rock Family.. My 5 bands to watch next year are JD and the FDCs, A Thousand Enemies, Skarlett Riot, NG26, Captain Horizon...There are a hundred others who I would like to add to that list and I SALUTE every one of them...

For all those who are wondering why Nirvana haven’t hit No 1 despite a facebook appeal to get them there, it’s probably because they couldn’t give free razor blades out with the download, to slit yer wrists as you listen and go into deep depression.( my opinion only)ha ha, I wait for the howls of derision , I hope the Wives Choir get that coveted slot and raise money for our Troops in the process..

Anyway just a short one today, so to all you lovely Rock Freaks out there have a very very Merry Christmas and a Happy New Year.. Here’s hoping to a bigger and better rockin 2012...