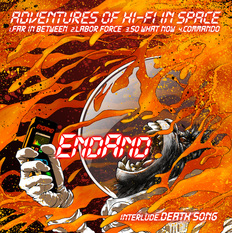 James from Independent Music Promotions recently dropped us a line about one of the acts they’re working with at the moment, EndAnd, to see what we thought of things. Originally started as a rock duo, Daniel Fenn and Mike Morales developed the style of their music and built up a reputation for ‘kicking ass’, before asking Bill Fizgerald to join the ranks, turning EndAnd into a fully-fledged band. Featuring appearances from across the King Killer Studios ranks, the album Adventures of Fi in Space was born from all of this hard work and dedication, so I thought we’d best have a listen to what was going on for them!

The album gets going with Far In Between, a punk rock fuelled melee of hammering guitar lines and haunting vocals. The mix here is one which sounds akin to early punk but with an updated feel, somehow combining that ‘in your face’ punk approach with a more sedate and refined rock edge, the sort of thing which will generate a following from anyone who hears it. Upbeat and the sort of thing that’s sure to get a live crowd moving from the off, this opening track sets the scene for the album and immediately shows us what we’re in for, starting things off on a high and getting you involved in the music. Labor Force comes up next and continues that dark and old school approach, this time basing the track around a softer guitar line and showing off the more laid back side of the band. Still managing to incorporate that good time feeling into the music whilst showing off the calmer side of things here, the track resulting here is one which holds the potential to become an anthem for the band, the sort of thing which people want to see on the live scene, and want to hear a hell of a lot more of. So far we’ve had rumbling basslines, hammering guitar solos, pounding drum rhythms and those dark and compelling vocal lines, a good start to the album for sure!

So What Now returns us to the opening moments of the album once again, throwing the track open with a hammering guitar line accompanied by a hard hitting and pounding bass rhythm, the mix getting you moving from the word go whether you’re ready or not. There’s a real sense of grunge running through this mix, the sort of thing which harks back to the likes of Bush and to an extent, Nirvana in the sound they’ve achieved. It’s striking how they’ve managed to incorporate hard hitting vocals into the mix without turning the track into something too heavy or too past the point of melody – it’s mixed well and sounds damned good. Commando and Death Song both continue this approach with aplomb, once again showing off the bands ability to combine hard and soft with aplomb, keeping the tracks measured and restrained as well as managing to pack a hell of a punch throughout. For me though, it was when Dawi came about that another high point was achieved on the album, standing out as a track to make sure you check out and showing once again that this is a band we need to be keeping an eye on. Opening with an ‘out there’ approach, the track gets going and lures you in to listen harder before kicking into a slow and sludgy mix of down tuned guitars and rumbling bass. The mix here is one which seems to envelop you in sound, the sort of thing which is designed to make you sit back and just listen so you can take it all in. Standing out as my own personal favourite track off of the album, this is one to get out and check out for sure!

Legend once again changes the approach of things, this time opening with a soft and acoustic guitar line akin to the likes of Marigold from Nirvana. Another track which seems to grow around you as it progresses, there’s something dark and haunting about this one once again, the sort of thing which penetrates the inner sanctum of your mind and stays with you for a long time to come. It’s striking how the track progresses, growing in depth and continually pushing the boundaries of what you thought you knew about EndAnd as a band. Sweet continues to push the bar of the album, once again opening with an upbeat feel and this time, harking back to the indie movement of the late 60’s and 70’s in the style on offer. This classic approach is something which has made this album stand out at a new level, the sort of thing which is going to make older fans connect in the same way as younger fans, offering EndAnd a chance to be well received by numerous different audiences.

It’s only left then for When and There to close the album, finishing on another upbeat note but this time throwing in an edge of syncopation to keep the mix interesting throughout. The closing moments here certainly leave things on a high, showing that there’s still a lot more to come from these guys and that they’re not a band to underestimate – a solid finish to a solid album.

From start to finish EndAnd have produced an album which pushes the boundaries of what should be achievable, should be possible, and should be found on an album like this. There are moments which will sit you back and make you think, moments which will make you want to get up and dance, and moments which will simply show you what music can sound like when it’s done well. Sure there’s a serious 90’s influence running through things a lot of the time but it works, and is the sort of thing which is about ready for a return any time now.

To find out more about EndAnd, check out their Facebook page HERE.

Check out their video to Commando below.