So we featured Generator Ohm a while back, so when the guys got in touch letting us know about their video for Youth In Arms, we were looking forward to seeing what they’d come up with. Directed by Dave Bunting from King Killer Studios, we checked out the track when we listened to their album (see below), so have a watch of the video and see what you reckon of things! 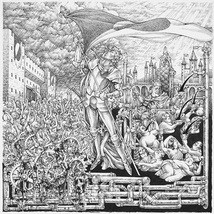 Another band we were recently put onto from Independent Music Promotions was Generator Ohm, a band formed in 2010 as the brainchild of Ernest D’amaso, Michael R.P. Morales and Willie Chen. We were sent through a copy of their album Upon The Me Om I to see what we thought of things, and reading through the ‘similar to’ list I was struck by the comparisons to the likes of At The Drive In, The Refused, Fugazi, Jeff Buckley and Soundgarden, suggesting this is going to be one hell of an album. With a future that’s looking damned bright for themselves, I figured I’d better hit play to see what was going on!

Lemming Shuffle gets things moving and immediately shows off the more punky influences of the band, getting things going with a hammering guitar line and pounding bass tone, the mix forming something fast paced and moving throughout. This opening track is one for the live scene for sure, the sort of thing which people will love seeing performed, and the sort of thing which will build a hell of a reputation for the band. What’s most striking from the opening moments here is that the track doesn’t follow the conventions of a simple track and instead, offers up different approaches, different styles and different movements, all designed to add to the complexity of the track and keep it interesting.  They Can See Us is further evidence of the refusal of the band to sit still with their style, this time opening with a more atmospheric styled track, almost coming as the calm after the storm. Bass heavy and fuelled by a sense of drum and bass, there’s something about this track which combines that punk/indie approach with the atmospheric style of dark drum and bass, the sort of thing which you’re not sure whether you should be dancing to or simply listening to – it’s a clever mix which takes a few listens to fully embrace but once you’ve got it, it sounds damned cool.

Platius once again shows us evidence of the different styles of the band, returning to the more rocky edge of things but still refusing to go down quietly. Syncopated beats combine with ‘out there’ guitar lines and Dave Grohl-esque vocals, forming a mix which sounds accessible, easy to listen to, yet still packs a punch and gets you up and moving. It’s hard to put into words what this track is like as simply, it seems to rove around from moment to moment, each time offering up a slightly different approach and all the time pushing the boundaries of what you’d expect to hear on an album like this. Smoke Eater, Marginal Hop and Lynarco’s Men all continue this approach, each track sounding like a hybrid of Muse combined with a punk band, yet still managing to stamp their own unique approach firmly onto the track so we don’t forget who we’re listening to. Youth In Arms on the other hand moves us back to the ‘simpler’ (I don’t like using that word but it’s the only one which I can think of here) approach to things, still managing to sound advanced and full of technical hooks, yet showing further that there’s more to these guys than meets the eye. Heavy guitars work with syncopated drums and rumbling bass rhythms to back up the soaring vocal lines, the mix forming something which is heavy yet not heavy, straight forward yet complex – in short, a track which is going to blow your mind!

It’s no surprise that Devotion in Flux continues to push the boundaries of what you’re expecting, this time throwing us into a bass-centric melee of guitars and drums, the mix forming something which is raw and edgy, yet well put together and refined at the same time. What’s been most striking about this album so far has been the bands ability to make you question everything you’re hearing, there’s not been a single track which follows the conventions you’re expecting to see, it’s a constant push for uniqueness and fresh sounding melodies. First Encounters of the Worst Kind and Devout, Devour both present us with tracks which could be considered advanced on any normal album, but here they sound almost normal, each one continuing to push out the melodic and daring approach of the band, leading us towards the end of the album. The end comes in the form of Yukon Tempest, a hard hitting and powerful track which oozes with emotion and bass heavy rhythms. As a final track this does what it should, finishes the album off nicely but leaves us wanting to hear more, showing there’s still more to come but not giving away too much about what to expect from the guys. Reaching the end has been an emotional journey, each track presenting a different outlook on things and showing there is a band out there who aren’t afraid to push the boundaries of what we think we know – but reaching the end I found myself with one thought – going through it all over again.

I don’t really know how to summarise the album on offer from Generator Ohm other than saying wow, that was one hell of a ride. From start to finish this is a record which will make you think, make you sit and listen, yet will also make you seriously think about what you thought you knew about music. I’ve come across bands which say they’re pushing the boundaries of what they do but to be honest, these guys have taken it to a whole new level. If you’re looking for a band designed to make you think and listen properly rather than something which you can just take at face value then this is the band for you – get on it.

To find out more about Generator Ohm, check out their Facebook page HERE.