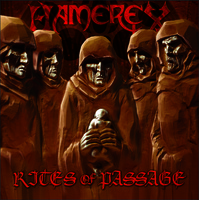 Formed in 2004, Hamerex are a band  who have set out to bring catchy and melodic heavy metal to the forefront and get you listening. This Wakefield 5 piece have been working tirelessly since their formation to develop their sound and perfect their tracks, and two EP’s later, we’ve got their full length album, Rites Of Passage, in our hands and ready to check out – so without further ado, I best hit play!

Opening with Aftershocks Of Death there’s an immediate launching into a distorted and heavy world, yet there’s also a firm sense of melody running through the guitar work which begins things. Continuing at a pace which is sure to get people moving along and feeding off of the bands energy, this is the sort of track you crave on the live scene as you know it’s going to be awesome. Powerful guitar work, hammering drums, rolling bass rhythms and roaring vocals – it’s all here and sounds damned good. The Headless Horseman continues this theme, this time adding in some intricate guitar work to get things going before launching us into a rolling riff – circle pit territory here we come. The sheer power of this track is evident from the word go, crafting a track which doesn’t just get you moving along, it gets you throwing shapes and roaring along before you know it. My person favourite thing about this track is how they’ve managed to create a sound which harks back to the glory days of metal whilst still keeping an updated freshness to things, it’s a clever mix and it’s been done well.

Stalker comes up next and slows things down initially, opening with a rumbling bass line before launching us back into the roaring melee of elements which the band seem to be able to create. After the deceptive start it’s almost a shock when things get back up to pace, almost as if to accentuate the sheer power of the track. Once again harking back to the likes of the Big Four, the sound here is one which manages to sound familiar whilst still sounding fresh and new, the intricate guitar work combining with the drum and bass to craft a sound which is simply mindblowing when you crank it to the loudest possible volume. Hypnotise marks a slight change in the approach to the album, this time launching us into a sludgy and heavy mix which adopts the slow approach yet still manages to pack one hell of a punch. The palm muted guitar work serves to further develop the all out sound of the band, but what’s most striking here is how the vocals seem to work in unison with the bass, somehow adding a further sense of depth to the mix to keep it sounding deep and loud. Constantly looking to raise the bar, The Lycan comes up next and marks a highpoint on the album in my eyes. Faster and more based on the conventions of thrash and old skool metal, this is a track which on first listen sounds a little off, but soon takes its rightful place on the album and demonstrates just how competent these guys are as a unit.

Title track Rites Of Passage comes up next and adds in a whole new dimension to things, this time opening with a soft and almost Spanish style guitar line before ushering in those face melting riffs once again. Despite the slow and relaxed start it’s clear to see why this track holds the name of the album, it seems to encapsulate the sound of the band in one track – adding in elements of metal, darkness, rock and all out power to ensure you’re still there and fully engaged in what’s going on.  Army Of Darkness continues this idea of throwing lots of different ideas in to a pot and seeing what comes out, once again presenting us with a track which combines the hard and soft approach, launching into things head first and not allowing you a moment to rest. The vocals here are lower down which add a further sense of power to things, resulting in a track which holds the darkness of Black Sabbath and the power of Metallica all in one, it’s a great track and possibly the one I would say is my personal favourite from the album. It’s a close call with To The End though, following on and launching us into a funky and heavy mix of hammering guitar lines, rolling drums and roving bass lines. The melody is striking throughout this track, somehow creating a sound which is insanely heavy yet at the same time, melodic.

Moving onto The Gates Of Hades everything seems to slow down once again at first, opening with a simple drum line before ushering in the guitar work. This opening doesn’t  last for long though and soon we’re thrust back into a rolling mix of hammering guitar lines and pounding rhythm sections. The vocals once again pull you through the track, telling a story as it progresses and making sure you’re there, listening and that if you’re seeing it live, you’re feeding off of the energy of the band. All too soon though we reach Waste Away which signals the ending of the album. Throwing out one last hurrah in the form of another anthem in the waiting, this track closes the album and leaves you with no doubt that this has been one hell of an album. Almost finishing on another high with the final track, the guitar and drum wok which closes the album will leave you wanting more and knowing that however these guys follow this record, it’s going to be good.

I don’t know what I expected from Hamerex, but I don’t think it was this. When I hit play on the album I was genuinely taken aback and ended up sitting back just listening for about 3 runs through before I could actually get anything written down – just so I could work out what I was going to say. Throughout this album there’s heavy, but there’s also melody and harmony, meaning what you get is the complete package. I can’t wait to see how they follow this album, as I’ve got a feeling it’s going to be very cool!

To find out more about Hamerex, check out their Facebook page HERE.