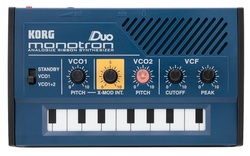 Korg Monotron Duo
This review focuses on something a little unusual: the Korg Monotoron Duo. Those of you who haven’t come across this strange contraption may have already worked out, through a basic knowledge of Korg, that it’s probably a synthesizer. What you may not have guessed is that it fits in your pocket, is powered by two triple A batteries and even has a built-in speaker – you know - for those spontaneous on-the-go Kraftwerk tribute gigs. However, perhaps most impressively, the oscillators and filters in this thing are 100% analogue. Now that’s pretty cool for something a little thicker than your iPhone.

At First Glance
I must admit that, initially, it looked a little gimmicky. The packaging is fairly ‘toy-like’, and the somewhat cheesy slogan, ‘Go-Anywhere Analogue’, doesn’t do much for its credibility, but this is all soon forgotten when you hook this thing up to a decent pair of speakers and start tweaking knobs. It’s probably worth pointing out at this point that I’m not exactly a synth novice – over the years I’ve owned a number of Korgs, a Roland JP8080, a Kurzweil and pretty much the entire Access Virus range. So when it comes to synths, I know my stuff – so believe me when I say that, for £35, this thing is an absolute beast.

Sound & Usability
So let’s get into a little more detail. What’s this thing really made of? Well, the ‘Duo’ in the name refers to the fact that it has two voltage-controlled oscillators, whereby the original Monotron only had one. These are complimented by an MS-20 filter circuit and a ribbon keyboard. The four potentiometers control (from left to right): VCO1 pitch, cross modulation, VCO2 pitch, filter cut-off and filter resonance (here labelled ‘peak’). The Monotron can also be used in two different modes – one in which only the first oscillator is enable and the second acts as an LFO, and another in which both oscillators are enabled and can be detuned to create huge analogue textures. The ribbon keyboard can also be set to either glide, chromatic, minor or major scales; making it highly playable. All in all, these features seem pretty astounding for an instrument that could easily be mistaken for a mere novelty or a toy.

It’s capable of producing an exhaustive range of tones full of the warm, rich qualities you’d expect from the classic analogue Korgs; putting everything from huge analogue basses to crisp leads right at your fingertips (quite literally). I’d particularly recommend it for anyone looking for a way to fill the gaps during your set – it’s a great tool for creating some atmosphere that can hold your set together during the odd tuning break between songs. The Monotron Duo even has an aux input so that you can use the filter to process anything from your iPod to your guitar –  all this from something that fits in your pocket.

All these features aside, there are a few limitations. Firstly, and primarily from my point of view, the ribbon controller. This is, quite simply, the best way of providing control on a unit of this size, but it does take some getting used to. I tried out a number of fairly creative approaches to holding and playing this thing, and no matter which way you come at it, it’s obvious that it’ll take some time to master (as all instruments do). Secondly, the i/o are mini-jacks, which is, again, due to its size – but it does make it a little difficult to hook up with other audio gear (particularly for guitarists, who are unlilkely to have a bunch of mini-jack-to-jacks lying around). But in all honesty, these aren’t so much shortcomings as they are intelligent design decisions – the functionality and flexibility that Korg have managed to fit into the Duo really is quite astonishing. All this for £35.

Verdict
I’ve never come across something that packs so much punch for the price – but then again, I’ve never, until now, come across Korg’s Monotron Duo. Whether you’re looking to give your recordings a little analogue warmth, add a little interest on stage, or just after a cool gadget to mess with from time to time, the Monotron Duo is definitely for you. Pick one up from your nearest music store for only £34.99 (£34.99!!!! Bargain!!!): http://www.dawsons.co.uk/korg-monotron-duo-analogue-ribbon-synthesizer