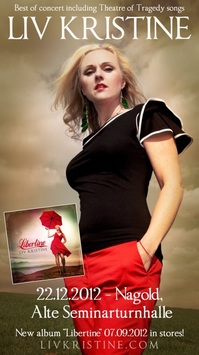 Watching Norwegian/German folk metallers Leaves’ Eyes before performing to a full house at Southampton’s Talking Heads, nerves and excitement build up as I prepare to interview front lady Liv Kristine. Here we talk about her solo album, her time on the tour so far and who she would have around for a dinner party. I would like to take the opportunity to say she is one of the loveliest ladies I had ever met and it was a pleasure to interview her.

Have you enjoyed your time in the UK so far?

Absolutely, I am so happy we managed to get this number of dates in the UK. Because usually it’s one or two gigs but this time it’s ten, which is great and I see the whole scene is growing strongly in the UK compared to the rest of Europe right now. I’ve really enjoyed being here.

What has been your highlight of the tour so far?

That’s a very good question because every night has been fantastic; we’ve played places that we’ve never played before like Cardiff, Belfast and here [Southampton] as well. The real highlight of the tour is the fact everyone from Leaves’ Eyes and Firewind get along so perfectly well on this tour, I think this is the best tour we have been on and the real highlight is everyone taking care of each other.

Chocolate and red wine after the show

I live in Germany but not actually a fan of Berlin and I just wrote a song about Paris for my upcoming solo album. So sorry Germany but there’s something special about Paris.

You’ve recently released a solo album, what are your inspirations behind your solo work?

Do you speak any languages other than Norwegian and English?

I speak Danish because my Mum’s half Danish, so I’m a quarter Danish. I speak German fluently. I would love to be able to speak Spanish since my sister speaks Spanish; so Norwegian, English, Danish, German and a little bit of Spanish. I should learn some French.

You are currently working on a new album with Leaves’ Eyes, will there be celtic influences like in Meredead?

I would like to keep them yes and I think that’s the direction we will go. The album will be a little bit harder, harsher and heavier than the recent ones. I guess less orchestral elements and more folk elements. Yes I like these raw folk elements so I think that’s where we’re going.

Where did the name Leaves’ Eyes come from?

Alex and I got married in July 2003 and we spent our honeymoon in Ireland somewhere between Cork and Kerry. We just had this idea about Leaves’ Eyes, I had already started writing lyrics. There was no record deal or anything and we started to think about forming a new band. I had just been kicked out of Theatre Of Tragedy so right there and then in Ireland, husband, honeymoon, your eyes. The leaves of the trees and it’s a homophone to my first name Liv, so it sounds like the eyes of Liv Kristine. It’s meant to be the eyes of the leaves in the trees, if you have a look at our first video Elegy you can see the leaves with eyes on. It’s up to your imagination but I think it fits.

Which five people would you invite to a dinner party and why? They can be dead or alive.

Ozzy Osbourne because he has influenced me ever since I was a child, that’s the music I grew up with Black Sabbath, so Ozzy Osbourne. Then there is Kate Bush because Kate [Bush] is the one I listen to when I would like to practise before a show or going to the studio because I never had any time to take singing lessons, it comes from the heart but I’m always open for dirty tricks. So Ozzy Osbourne, Kate Bush, Tori Amos, Madonna if she behaves and Dali Lama, it would be an interesting dinner party.


Any final words for fans and listeners?

I just want to say thank you for being there throughout all these years, it’s been eighteen years. I enjoy being on the road, meeting and greeting everyone after the show. Which I usually do if the gig is not too big, you know at festivals is hard to do. At the smaller venues it’s easier to do so we will be happy to see you at the merchandise stand after the show and thank you so much to everyone being there. Also thank you to you for doing the interview.