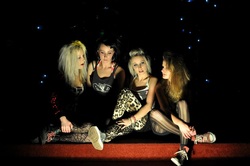 1). What are the names of your members?
Amy on bass and backing vocals, Alison on lead vocals and guitar, Anna on guitar and vocals and Abby on skins.

2). When did you all get together?
We started makin a racket together about 2004 before we even knew how to play our intruments and by summer of 2005 we played our first gig at the school we attended, lookin back on those pictures..we look like a cross between hanson and abba and abby closely resembeling niel from the young ones.

3). How did you all meet?
We bumped into eachother in our dads ballbag and said..."if you make it, we'll form a band!"....We're all sisters

4). How would you describe your music?
LOUD, RAW and ENERGETIC

5). Who are your major influences?
Poly styrene as a musician and a person, joan jett, L7, hole, The distillers, films that we love, things that happen in our lives, and people that generally griinnd our gearrrs!

6). Complete the sentence: One day as a band we hope to…
...be able to afford a ford mustang so we look shmokin rollin up to gigs. But if that dont work out, we'd like to go to hell..with a cat..and listen to records....

8). What are your plans for the upcoming year?
To play all the shows we've got booked around the country, makin more music videos, releasing our debut album...and milkin the fuck outta iit!

9). What albums/EP’s have you released so far and where can people get hold of them?
We recorded an EP yeeears ago which we only sold at our shows...but lets not talk about that. Get on youtube and hit up our two promo videos 'Dickhead' and 'Enemy within'....then sit tight for our album!

10). Finally – say something profound that will make everyone think:
The future is just the present trying to repeat the pas

Check out Maid Of Ace at their Facebook HERE, and Headcheck Records HERE