ME - Live in Southampton 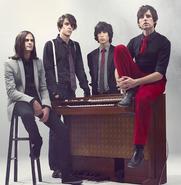 We were put onto Australian band ME by Mel, a recommendation which goes a long way here at Loud-Stuff. Over here in the UK on tour supporting Panic At The Disco at the moment, we sent someone down to check out what their live show was like!

Check out what Rachel found when she went to see them in Southampton:

We arrived at the doors to see two huge queue's either side of the guildhall, which honestly I've never seen before, both main doors had a queue stretching back down the street either side of the building which was quite impressive (estimate probably was about an hour long waiting if you were at the back).  The gig was sold out online, and with the Guildhall holding 1600  they were going to be playing to a huge crowd!  Again, we’ve not seen anything like that at the gigs we usually go to there (Bowling For Soup etc) so they were definitely hitting a big crowd for a midweek gig. .

[Me] were billed for a half hour set at 8pm with Panic coming on at 9 for an hour and a half so as we entered the building, we had a look at the merch stand at the front. It was mostly Panic At The Disco stuff with only one board selling 2 types of t-shirts and an EP for sale at a fiver for ME, pre-set they looked to be being pretty much ignored by the crowd buying stuff, this changed completely afterwards, and when we went to get a CD the 4 people served before us had all gone to buy the EP too, so they obviously hit the mark!

ME’s set started with a full orchestral fanfare, epic with opera, brass,timpani and the like before they immediately hit into their first song, Hoo Ha, keeping the theme firmly set on the louder side of the spectrum! What was really striking was how they had managed to get the sound settings perfect, they were impressively clear for somewhere like the guildhall which is really well known for having appalling acoustics.  I've heard much more famous bands sound a hell of a lot worse in that place.  They set the bass on the drums quite heavy, but it really worked and added to the whole atmosphere of the crowd, personally I’d say they sounded better live than they did recorded. As the second song, Westwards Backwards, kicked in the orchestral approach seemed to continue, part way through they just started doing instrumentals which involved one of the guitarists running back and him and the drummer both playing the drums in a very tribal sort of rhythm, something which got everyone in the crowd on their side and cheering along. Once they'd finished with the drums the guitarist ran back and threw straight into a guitar duel with the other guitarist, almost hammering out some Dragonforce style harmonies.

The next couple of songs (Like A Fox, Naked and Under The Sun) were good but were just those bog standard songs you get at sets.  By halfway through they had all of the crowd cheering and even a few girls hollering "we love you".  They were reasonably chatty, with an entertaining interlude to tell the crowd that the drummer (Spike) had apparently lost his trousers the night before and was now just wearing long johns.  Most people by this point were at a minimum tapping their feet, but you could see most people had got in to them which was great to see as I think some people were a bit dubious about them with the orchestral beginning.

One track toward the end of the set, Vampire, had some really cool old school chugging riffs in it, despite this we could help but hear quite a bit of Muse-like influence in the music, as well as the occasionally off beat stops in verses you get in SOAD style stuff.  The last song of the set, Working Life, was almost as epic as the first, making you feel that you'd somehow come full circle, which was quite satisfying in some ways.  It was nice to finish the set in the same way they started and made sure the crowd were all cheering and applauding by the end of the set.

The set was great, and unlike Panic who came after, there were no ostentatious stage props, they weren't particularly costumed up, it was just them and their instruments. Having said that, you didn't feel they needed it, they had the power to pull off the set without glitz and glamour because they were just great musicians. The guitarists were incredibly able as some of the solo's showed, displaying an almost Dragonforce ability to hammer out high note solo's incredibly quickly and make them sound amazing.  There wasn't a lot of movement around the stage, but they didn't really need it, as everything was simply revealed in the music. Testament to their success I think was the people buying the CD's afterwards, people seemed to really like the set and seemed firmly onside with the band afterwards.

I think if given a full length set, given the clarity of the music, and the ability of the band, they could easily hold their own up against the best of them.

Panic At The Disco were good, but it was just filled with screaming women (who made up about 65% of the crowd I'd say), and I really dislike the huge stage props they whack on stage. This in some ways showed up the difference between [ME] and Panic At The Disco, as they weren't really required for [Me] but Panic At The Disco seemed to rely on them.  I must admit I'm not a big fan of them as a band, and as Chris put it "they're the only band who's music he's actually deleted off his hard drive".  They were a blend of pop rock aimed at young people and while it hit the mark for that audience, I think that [Me]'s set was far better and actually showed up the headliners when they came on stage.

From an observers perspective, I think [Me] can find far better bands to support and can see them doing well on the festival circuit from here in – definitely one to get out there and check out!

Check out Mel's expose and interview with the band, HERE.