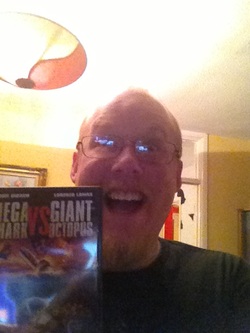 Now the reason I decided to review this film first, is because it's one that I actually own on dvd. Yes mock me if you must but when it's available for £2.99 at your local Morrisons, and the cover shows a huge shark fighting a giant octopus, you've just GOT to buy it.

It's because of this film that I decided to do the whole B-Movies review thing on Loud-Stuff. That, along with Dave sending me a link to another AWESOME B-lister that got me thinking of the good old days.

When Dave and I were at university together, we weren't like kids are nowadays - drinking, smoking and general tomfoolery. Yes we did that too but not exclusively. Some of the best nights we had involved a few eight-packs of Oranjeboom lager, ingredients to make our own pizza and a trip to Blockbusters.

Ah, Blockbusters! Dave and I spent many a night perusing the shop looking for another quality film to entertain us for 2 hours with. This was long before Netflix or LoveFilm so we actually HAD to get out physically to rent a film, and we LOVED IT!!! This was without a doubt the highlight of our uni days. We'd come back with something completely rubbish, a bag of jellybeans and a massive smile on our faces.

This is one of the the types of film we'd rent. With a budget of what seems to be only £10, special effects that can be made by a ten year old with a macbook, and acting that makes Paris Hilton worthy of an Oscar, this has to be the biggest pile of crap that we could have possibly put in our DVD player. That is what makes this type of film so good. We don't buy films like this for the CGI, we don't buy films like this for the acting; we buy it purely for the very purpose of it being crap. What's £2.99 now these days? A single pint in the pub usually costs more.

Before I ramble on, let me get back to the film. Mega Shark vs. Giant Octopus. Read that line once more. MEGA Shark.... GIANT Octopus....

A film with a title like that just HAS to be amazing.

The storyline is simple: 10 million years ago a giant shark and a huge octopus were frozen in battle. In the present day they're unfrozen and the battle
continues along with a few human casulties in the way. Put it this way, at one point the shark jumps up in the air and catches a Boeing 747 in mid flight.
Yes, you read that right. A giant aircraft travelling at 600 miles an hour, at 30000 feet gets plucked away like it's nothing. The octopus also takes down an
oilrig. It's this type of action that you get from this film. Sound good? It's not. Many of the CGI scenes were constantly repeated. Whenever the shark or
octopus attacked, you usually saw it preparing or approaching for the attack several times using the exact same footage.
Sometimes they even bothered to mirror image the scene to make it look different. Nice!!!

Despite all this, if you've seen the trailer, you might still actually want to see it. Don't! The film is labelled 88 minutes long but with the terrible
acting it might as well be 88 HOURS long. I'm sure the Lord of the Rings trilogy was shorter. There are plenty of B-movies out there that are awesome
but honestly, this isn't one.

But, hey, for the price of a pint you get almost an hour and a half of "oh god, really?", and a very decorative beer coaster.