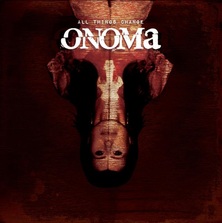 An email which we recently received brought about a first for us here at Loud-Stuff, an alternative metal band from Haifa and Tel Aviv in Israel – somewhere that I’ve never considered there to be a music scene for what ever reason! Taking their name from the Greek word for ‘Name’ (see what they did there?), the band have set out with their own take on alternative metal, down tuning their instruments combining emotive dark melodies with raw aggressiveness and tight rhythmic grooves (their words), which sounds pretty cool to me. They sent me a copy of their latest record, All Things Change, so I figured I’d better check out what they had on offer!

Opening the record with Lauds there’s a somehow familiar sounding start, the sound of the track growing around you and incorporating different elements, all of them working in harmony to form this sound which is somehow dark yet comforting, new yet familiar – it’s a hell of an opening moment to an album for sure. The full clarity of the situation is realised as Dear God takes over the lead, changing from the soft and melodic openings and instead becoming a down tuned, bass heavy melee of powerful guitar work, pounding drumlines and spitting vocals. The backing music takes care of all of the power you could possibly want from the track, keeping things firmly rooted in heavy and adding in a sense of groove and funkiness – the sort of thing which is going to get crowds moving and dancing along to the live show. To me, this is music which is going to realise its true potential on the live scene, it’s got that sound which simply misses the spot on a recording, but you know is going to be awesome to see live.

Cannot Go follows on and immediately transports us back to the heyday of alternative metal, opening up with a riff which somehow sounds fresh and exciting, despite managing to hark back to the glory days of alt rock and metal. Melodic once again, the laid back grungy sound of this track elevates it to a new level, somehow offering up a unique approach to their music, combining elements which wouldn’t normally be seen together and yet managing to make them work on the record. The same can be said for Loser Friendly and Bug, both of which seem to draw influence from a range of sources, from Deftones through to Pearl Jam in their lyrical approach and content – it’s a combination of different styles which Onoma seem to have taken, whacked together, and made them work! For me though, Animal is the serious high point on the record, offering up a syncopated track which shows off the bands more technical side and their ability to add complexity where others would go for simplicity. Once again harking back towards the more nu-metal side of things, this is a track which stands out on the album, a track which showcases the bands style, aggression and ability, and as such, can be considered one of the main high points of the record as a whole – make sure you check this track out.

Moving on to Fight Myself we’re shown the bands full force and ability to devastate, opening with a sludgy, powerful guitar line and hammering out a track which once again, seems to jump from influence to influence from start to finish. At first listen I found myself thinking that the track was disjointed, but the more I listened to it the more it made sense to me, it’s a combination of movements which result in the track, the sort of track which will take you on a journey, sit you back and make you simply listen – it’s pretty damned impressive when you break it apart. It’s only left then for Nothing’s Right to close the record, finishing on another more bass heavy track which will get you out there to see them live (assuming you live in Israel, or they come over here). This is another track which I had to listen to a couple of times, but am glad I did now. Out there, carefully pieced together, syncopated and certainly one of the stranger (I don’t think that’s the right word but I can’t think of the word I mean!) moments on the record at times, the closing moments on this album seem to open the door for the next chapter, ushering in what is to follow and leaving you wanting to hear more.

I don’t know what I expected from the chaps in Onoma, but it wasn’t this album! As I said at the start, I’ve never had Israel down as somewhere that produces music (other than Eurovision – and I mean seriously……just no!) yet here’s an album which shows that alternative metal is alive and well over there. Sure, it’s safe to say the album isn’t perfect, but in my humble opinion music shouldn’t be perfect otherwise you’re ending up with over produced pop – what you’ve got instead is a raw display of a band who clearly love their craft, understand it, and are on the road to producing something spectacular.

To find out more about Onoma, check out their Facebook page HERE, and grab their music at the links below!
http://onomaband.bigcartel.com/   - For the physical album
http://www.cdbaby.com/cd/onoma - For a digital mp3 downloadable album
Also available on Itunes/Amazon
The official website is - www.onomaband.com