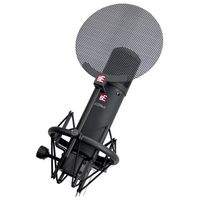 One of the most important things to consider when preparing a home recording setup or project studio is what mics to buy. Unlike a pro studio, it’s unlikely that you have several grand to us on a top-of-the-line recording setup, and this means that a) you want to get the best gear you can within a reasonable price range, and b) you want to be able to do a lot with that gear once you’ve got it – you don’t want a dedicated vocal mic; you want a good all-rounder that can bring real value to your project setup, something that performs well across a decent range of instruments. So... what do you buy?

A typical choice would be a dynamic, as there’s a good range of decent dynamics within the £200-£300 price bracket; but I was interested in a condenser, and I wanted to see if there was a decent wide-diaphragm condenser within this price range that would be worth buying over the dynamic alternatives.

I did a lot of digging around, undertaking the usual research online, as many do, but the great thing for me was that, at the time, I was at uni. This meant I had access to the university’s recording studio, putting me in an ideal position to try out a whole range of mics, including a Neumann U87 (which retails for a mere £1,800). Unfortunately the U87 is a dream to all but a lucky few, but as I tried out the various mics, I kept coming back to one particularly impressive unit. Not only was it impressively flexible – it was affordable.

This mic was, obviously (assuming you’ve read the title of the review), the sE2200a. I’ve now had it for around three years, and so I can honestly say that, time and time again, the factor that impresses me most about this piece of kit is its versatility. You can use this on vocals and get beautifully rich, warm tones, or on guitars for bright, full-bodied recordings. Sure, it can’t provide the exceptional quality you’ll get from a U87, but it’s a reliable mic that’s neutral enough to sit nicely in a mix and yet still has its own character.

Over the years I’ve used the sE2200a on strings, piano, guitar, vocals and even as an overhead mic when tracking drums. Every time it’s provided me with clarity and an extremely usable recording – often leaving me something very close to the finished product, with minimal tweaking required. On top of that, it’s a well built piece of kit – it’s a condenser mic, so if you drop it then it probably will break, but for what it is it’s sturdily constructed. This said, the unit comes with a nice SE branded case, which makes looking after it nice & simple.

This review’s really about personal experience – that’s what really counts, rather than bias product descriptions from the manufacturer – but I think it’s worth departing from this purist journalistic viewpoint for a second. For what it’s worth, the sE2200a is, as mentioned on the sE site, is a staple piece of kit in professional studios the world over. On top of this, it’s won a number of awards during its 12 year history, including winning the Music Industry Association award twice. Anyway, enough propaganda...

So, in conclusion, if you’re after a decent quality condenser mic for under £300, then the sE2200a is definitely your guy. Before I finish it’s worth noting that it’s worth purchasing a pop shield and a high quality XLR to get the most out of it; but armed with these two commodities, I can assure you the 2200a will be a great addition to your home/project studio.

You can grab the 2200a’s new and improved replacement – the sE 2200a II – from your local music store: http://www.dawsons.co.uk/se-electronics-se2200a-ii-multi-pattern-condenser-microphone