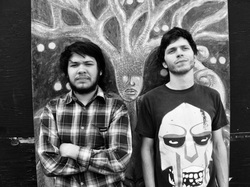 When we’re contacted about a band described as utilizing a smorgasbord of instruments and looping techniques to concoct a unique cocktail of experimental rock, we tend to sit up and take note to see what’s going on. That’s exactly what we’ve got with two piece Time and Energy, a band formed out of the ashes of a previous band who are striving to reach new levels with their music. With Jorge Rios taking care of vocals, guitar, bass, keys and percussion, and Brennan Roach taking on drums, percussion, bass, guitar, keys and clarinet, this is a two piece who are pushing the limits of their music. As such, when we were sent through a copy of Strange Kind Of Focus to check out, we thought we’d best see what was going on!

As Hot Air gets things in motion we’re lead into a strange melee of elements, the mix forming a sort of laid back sound which oozes out of the speakers with a sense of cool and calm, yet with a sense that there’s more to come. As the vocals come in and take the lead the track continues to grow, developing in its sound to form into something which isn’t simple or straight forward, but instead loaded with different elements, different approaches, and different outlooks on their musical approach. When I saw there was a clarinet in the mix I had my doubts about whether this was going to work, but listening to it now it works, it’s got that cool jazz style feel which gives the music a lift to a new level, transporting it and the listener to a calm and reflective place where all that matters is the music that’s playing at that moment in time. Thought Forms continues this approach further, this time focusing more on the guitar work and building up the anticipation through the opening moments of the track. Continuing the calm and reflective approach of the album, this track moves towards a more upbeat feel, almost incorporating a sense of South American style into things to give it that funky and upbeat feel.

Tree Salad once again adds a new dimension to the record, still continuing that jazzy and upbeat approach to things yet at the same time continuing to push the boundaries of what’s possible through their music. The different elements which form this track are well balanced, allowing us to hear the keys, the bass, drums and vocals without one becoming overbearing or over the top, it’s a mix which makes you want to dance, makes you want to move, and makes you want to crank the volume up to make sure you hear everything that’s going on. Calming things down a little for Breakdown the tone suddenly changes to a more laid back and cool style, opening with an acoustic guitar line which paves the way for the track to begin, ushering in a sense of emotion as well as calm and reflection. This track reminds me of Newton Faulkner or someone similar, it’s got that calm acoustic approach which makes you think of sunny evenings on the beach, moments with friends, and moments where you can simply sit back, chill out and enjoy what you’re hearing.

Split Clean returns us to the more out there approach of the band, reminding us that what we’re hearing isn’t something straight forward or simple but instead something which is going to be unexpected at every turn. Moving from roving basslines through to heavy drum samples, each twist and turn of this track presents a new level, a new outlook, and a constant sense of the unexpected becoming the expected – if that even makes sense! Feeding straight into DaDaDa the theme of syncopated and out there beats continue, the track once again forming around you as it begins and pulling you in to make sure you don’t miss a single beat. Live instruments combine with digital effects and different musical styles to form a track which isn’t so much one you’d dance to, but instead one which makes you move along to it. The beat is infectious throughout, meaning it’s impossible to sit still whilst it’s playing, movement becomes an involuntary action in the end, meaning you’re constantly responding physically to the beats the guys are throwing out, it’s a clever achievement and to be honest, not something I’ve ever come across before.

Sitting On A Scale, O’Molly and Think It Through all continue the album towards the end, each track continuing to show that sometimes two people can create a sound on a par with even the biggest bands out there. Calm one moment, upbeat the next, it’s a constant journey with this album, almost like they’re dragging you along for the ride and not letting one particular approach steal the show. Closing with Acid Jam the album finishes on another upbeat and faster moving note, closing with a track which once again showcases all of the different abilities the guys have got and leaves us wanting just one more taste of their music. Closing the album was always going to be a difficult task as simply, it’s not an album that’s easy to finish due to the different approaches which appear throughout it, but this final track manages it, closes this chapter, and leaves us ready for whatever they’re going to follow this one with!

It’s not often I come across a band that leaves me speechless, but with Time and Energy I’m pretty close! The music they’ve got on offer here doesn’t follow convention, doesn’t fit into a specific genre as such and instead, presents the listener with their own personal feelings about what their music should sound like. This isn’t an album to go into in order to simply listen to it, it’s an album to take on board, feel, and allow to grow around you. I’m looking forward to hearing what they come up with next as simply, it’s going to be interesting to check out!

To find out more about Time And Energy, check out their Facebook page HERE.