We The Divide - With Bated Breath

Always on the look out for new and exciting bands to check out, we’ve been lucky to come across quite a few since setting up Loud-Stuff. One band which has always floated out has been We The Divide, a Devon based Metalcore/Hardcore band who we featured a while back. They dropped us a line recently to let us know about another new track, With Bated Breath, to see what we thought.

The tried and tested method of We The Divide is a recipe for success, so it would quite frankly be silly for them to change their method too much, and it’s good to see that here they’ve not! Opening as you’d expect from a band of this style, the hard hitting guitar lines are backed up by hammering drum lines, raspy vocals and a rumbling bass, all coming together to form a track which you’re going to immediately want to crank up loud. What’s most striking about the track is the differing time signatures which they’ve thrown into the mix, sometimes going for straight forwards and other times throwing out some syncopated moments of sheer genius. Raw, energetic and quite frankly, downright heavy from the word go, this is an example of a band who are continuing to develop their style and progress, each track coming as a new exciting moment on their journey.

I’ve said it before, but I don’t know that We The Divide sell themselves correctly with their tag of metalcore and hardcore, there’s just more to the music. Sure, the basics are there and it would be impossible not to mention them when listening to the music, but there’s also soaring melodies thrown into the mix, moments which could almost be replicated on an orchestral stage, and others which make you simply want to get in a pit and go mad.

This is a band who are working hard to develop their style and sound, and based on the journey so far, it’s working damned well!

We The Divide - Jar Of Dirt 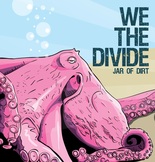 We The Divide were good enough to get in touch about their new track Jar Of Dirt for us to check out, as a follow on to the previous review we did of some of their stuff (see below). As a fan of the other stuff, I was looking forward to seeing how these guys had developed since I last heard them.

How have they developed? Well, simply, woah! The music is hammering, powerful and unrelenting from the moment it begins until the second it comes to a close, the whole mix keeping the bass heavy and the drums rolling to really power everything up and pull you in. Keeping the bass high in the mix whilst making sure the riffs hammer out over it, this is a track which is going to get live crowds moving and going mental! What I really liked though is how the band seem to change the time signature throughout the track, one moment keeping everything slow and heavy then the next second picking back up to a blistering pace and not leaving you time to catch a breath. The vocals are powerful and really bring this track alive, whilst everything in the background keeps that heavy feeling firmly in place. The shock of a moment of electronic effects in the mid section of the song further develop it as well (where sometimes it can destroy a song) and add a sense of melody to proceedings, everything is heavy yet there’s a definite tune there to connect to.

In all, this track is one hell of a step up and shows that these guys are ready to face the world now – and this track could be the one to do it!

To hear Jar of Dirt, check out We The Divides Facebook page HERE

Exeter based We The Divide were recommended to us by a couple of people, so we thought we should probably get out and have a listen to them to see what they’ve got!

Opening with Reflections, the track starts in a quiet unassuming way, luring the listener into a false sense of security – this is soon broken when the screeching vocals and punchy guitar kick in. Moving in ever increasing waves of heaviness, this track pummels the listener with break down upon screamed vocal upon hammering drum line upon sludgy riff. Listening to it, I’m not sure the word ‘heavy’ does this sound justice!

Wolves opens in much the same way as the first track ends things, heavy and fast. The vocals are roared over a solid guitar line and drum beat, building into a dark track with screaming vocals, roars, feedback and twisting and turning guitar lines. At times, this track seems to fade out but soon launches straight back into the original heavy and fast paced track it started out as. This track works as a follow on from Reflections, but as a stand alone track it loses out on the fading in and out. Whilst this brings the track more depth, at times you question whether the track is ending or not.

Final track Betrayal opens heavy once again only this time launches into a pounding break down less than a minute into the track. Pinch harmonics and roaring vocals add to the already heavy riff before suddenly picking up the pace again and moving onwards with the track. This is without a doubt my favourite track here as it has a funky edge to the guitars at times which is offset by the drumming, all of this making it interesting to listen to. The change around 2 minutes adds a more harmonic edge to the track as well demonstrating the bands capability to mix styles with one another.

All in all, I’ve only hear 3 tracks by We The Divide, but I know I want to hear more. It’s hard to judge a band on only a few songs so for now, I’ll reserve over all judgement. As a start though what’s here sounds good, providing they stick with this method which they’ve clearly already developed, they should be on course to winning!

Oh – and they’re playing the Pen and Quill in Taunton, one of the first pubs I ever got served a beer in many years ago…..which means they must be good!

To find out more about We The Divide, check out their Facebook page HERE.